We have been home for a week and a half now.  Vicki and Norm visited with us while they had their boat hauled out for regular maintenance.  It was a very fun visit as we all got used to being on land, shopping, doing lots of laundry, going to movies, exercising, cooking  and just hanging out.  We enjoyed reconnecting with our good friends who we had not seen for over a year.

Following are some pictures that we wanted to post.  The first few are from the Norfolk and Portsmouth area.  Then it is through the ICW to Morehead City. 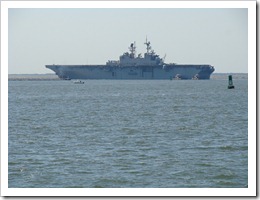 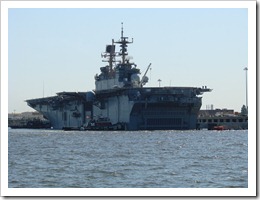 This aircraft carrier came in from the ocean as we were coming in from the Lower Chesapeake.  We figured that we should just stay out of its way.  Notice all the tugs helping to get her into place in her slip. 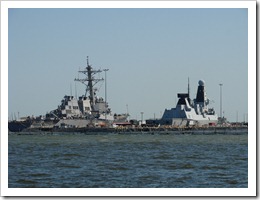 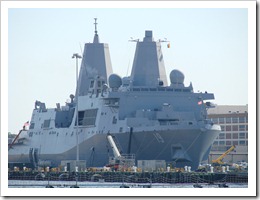 These appear to be missile carrying ships 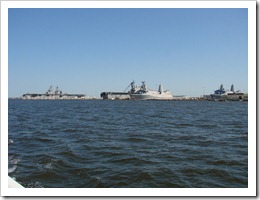 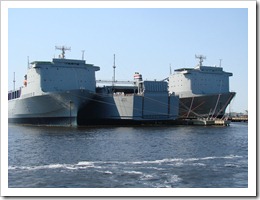 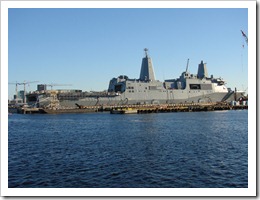 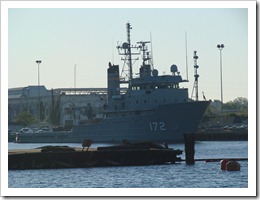 We had a nice evening in a marina in Portsmouth, VA.  The dock staff were really great and we were able to get both milk and wine at the dock store.  How cool is that? 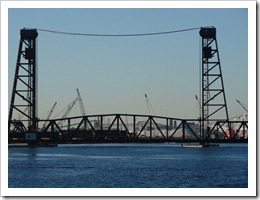 Going down the ICW leaving the Norfolk area is always tricky.  There are several bridges for which we have to time our arrival to meet their opening schedule.  There are also several RR bridges which are almost always open, except in our case when it was down and a train was going across it!  There is also a small lock so everything has to be timed and we either go slow, our normal operating procedure, or go really, really slow so as not to get to a bridge and have to hang out for 15 minutes or so. 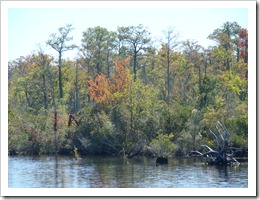 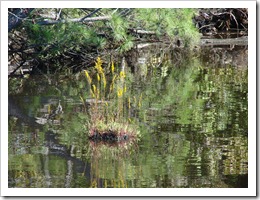 Going south on the ICW.  Finally, the leaves are starting to change 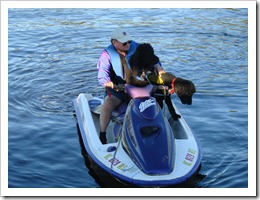 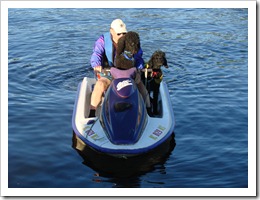 Just as we entered the Pungo River there was another engine noise, growing in intensity.  Just as I turned my head to the left, a small single-engine aircraft passed Rickshaw (on the port side) at about eye level … probably 15 feet off the water … and waved to Rick on the helm.  He continued low, and buzzed the boat in front of us before climbing in altitude. 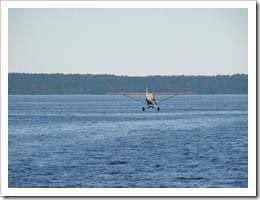 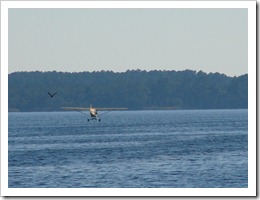 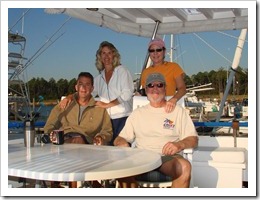 The last night out on this trip was in River Dunes Marina in NC.  Our friends Brenda and Todd, aboard Lifes2Short, joined us for dinner and laughs.  We had another great evening with you.  They are going on south and we’ll take a right turn and cruise into our home marina!  Have a ball Lifes2Short.

It was our anniversary this week and Rick surprised Lynnie with a beautiful bouquet at the restaurant.  Awwwwww.  Thank you, Rick 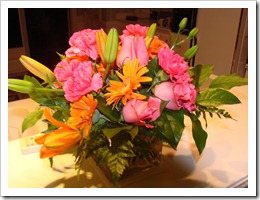 What a GRAND trip we had.  Thanks for watching our blog and giving us such fun feedback.  We look forward to seeing you ALL soon.  L&R

Posted by Rick and Lynnie Tierney at 1:07 PM